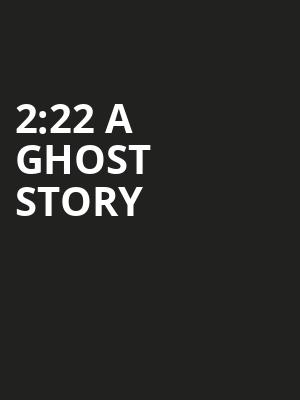 Photo by Crina Parasca on Unsplash

A slick, chilling romp of a play

After scaring London audiences for the better part of two years, director Matthew Dunster brings Danny Robbins' (BBC's The Battersea Poltergeist) spine-chilling new play to American audiences in this specially penned adaptation, receiving its North American premiere at the Ahmanson Theatre this spooky season, starring Constance Wu, Anna Camp, Finn Wittrock, and Adam Rothenburg. The story of four friends subjected to a frightening night, 2:22 A Ghost Story encourages the audience to search for clues and guess along as things repeatedly go bump in the night.

With the West End run having its fair share of guest stars including Lily Allen and Tom Felton, we're sure the Ahmanson will throw in a few surprises of its own! Watch this space.

Both funny and scary, 2:22 will take you on an adrenaline-fueled night as Jenny is sure her new house is haunted and is on a mission of trying to convince her skeptical husband Sam. During a dinner party with friends Lauren and Ben, the group starts to feel strange energy looming over them, something is getting closer. Will staying up until 2:22 give them the answers they want? Are ghosts real? Or will skeptic Sam have the last laugh?

Two hours, including one 15-minute intermission

Sound good to you? Share this page on social media and let your friends know about 2:22 A Ghost Story at Ahmanson Theater.