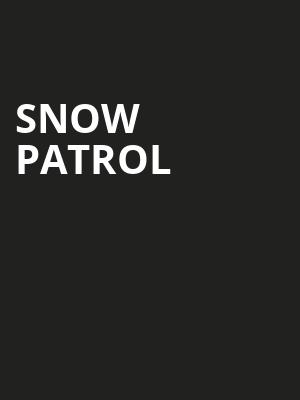 Still flying, gloriously and unpredictably, by the seat of their pants...

snow patrol are back!

The Scottish-formed band behind the hit "Chasing Cars" has enjoyed phenomenal success from humble university beginnings. Now it's time for the five-piece to head back to the USA with their famed Acoustic Tour! Hear your favorite hits, ("Just Say Yes", "Chasing Cars" to name a couple!) like never before in this exclusive North American run.

Their 2005 album Eyes Open, is home of one of the most emotionally potent tunes of the 21st century, "Chasing Cars". With over 100,000 radio plays in the UK, two million downloads in the US, and the accolade of "Best Song of All Time" from the listeners of Virgin Radio, "Chasing Cars" also had the rare distinction of closing the BBC's long-running TV chart show Top Of The Pops in July 2006. The effect was phenomenal, leading to Eyes Open selling 4.7m copies worldwide.

Snow Patrol has been around for longer than you may think. Something Gary... more

It was a very good mix of songs and good to have Snow Patrol back. Next... more

Sound good to you? Share this page on social media and let your friends know about Snow Patrol at Cathedral Sanctuary at Immanuel Presbyterian.