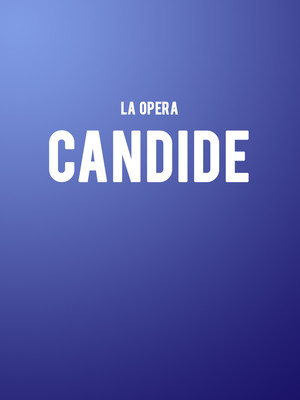 If this is the best of possible worlds, what then are the others?

Full of sprit, satire, silliness and sass, this bounding opera first opened in 1954 where it was met a with less than enthusiastic response. However Candide's vim and vigour has gone on to win it enormous popularity all over the world as audiences defied the critics and took to the freewheeling adventure and its raft of musical theatre classics, including the magnificent 'Glitter and be Gay' and 'Make Our Garden Grow'.

Based on a novella from Voltaire, Candide is all at once a love story, a drama, a thriller and a tragedy rolled into one merry go round of ever revived characters who populate Candide's journey. From living in a swanky castle as a Baron's illegitimate son to a beggar on the streets, to earthquake causing heretic and much much more in-between, prepare to follow a dazzling story that fills the auditorium with glee and wonder.

Two hours and 30 minutes with one intermission

Jeffrey Rockwell: “NOT the Best of all Possible "Candides"”

The miraculous Overture emerges from the pit, meticulously played and conducted,... more

Matthew: “Irredeemable and not self aware enough to be satire”

Unfortunately, we must report that Candide at LA Opera is some of the worst... more

Sound good to you? Share this page on social media and let your friends know about La Opera - Candide at Dorothy Chandler Pavilion.