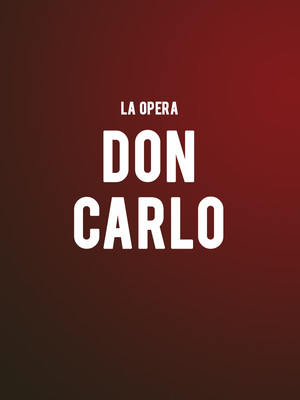 LA Opera has created an extraordinary realization of the drama and music in Verdi's huge, rawboned and rarely performed operatic masterpiece

Two veritable operatic icons grace the stage for LA Opera's stunning production of Verdi's grandest of grand operas. Making his first appearance with the company for the first time almost two decades, Ramon Vargas steps into the shoes of the heartbroken Don Carlo, whilst powerhouse Placido Domingo will captivate audiences as his best friend and confidant Rodrigue.

Extravagant and richly layered, Don Carlo is a treasure of the repertoire with its thrilling tapestry of forbidden love, political intrigue, sacrifice and religious persecution against the tumult of the war between Spain and France. First playing in 1867 at the Paris Opera, it is one of the most adapted and enjoyed of Verdi's work and a spectacular treat for all types of opera-goer.

Sung in Italian with English supertitles

Don Carlo is arguably one of Verdi's greatest achievements and there have... more

Sound good to you? Share this page on social media and let your friends know about LA Opera - Don Carlo at Dorothy Chandler Pavilion.