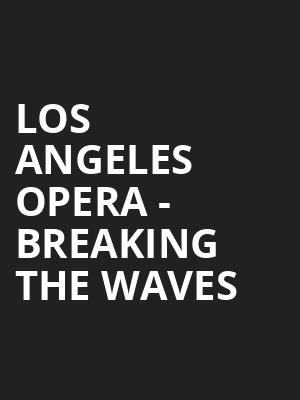 It is not easy to find new operas that command attention, tell their story lucidly and create a powerful, permeating mood. Dark and daring, Breaking the Waves does all this with sensitivity and style.

Causing a stir upon its debut performance in 2016, the opera garnered the 2017 Best New Opera Award from the Music Critics Association of North America. Based on Lars von Trier's film of the same name, the story takes place in the Scottish Highlands of the 1970s and chronicles the devoted relationship between Bess and her husband Jan. When Jan becomes paralyzed after an almost fatal accident, he comes up with a proposal that tests and takes their devotion to the extreme.

Sound good to you? Share this page on social media and let your friends know about Los Angeles Opera - Breaking The Waves at Dorothy Chandler Pavilion.