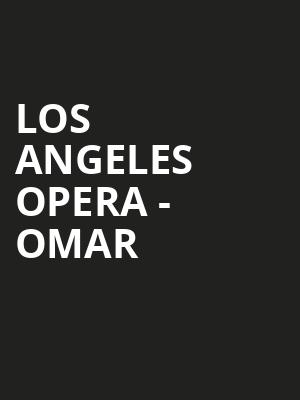 I am still pondering the artistic miracle that unfolded before me... a showcase for the musical genius of Rhiannon Giddens."

As part of the LA Opera's 2022-23 Season, the company hosts the West Coast premiere of this compelling opera from Rhiannan Gidden and Michael Abels. Based on the autobiography of Omar Ibn Said, the only surviving slave narrative written in Arabic from the era, Omar tells the story of how the Muslim scholar was ripped from his peaceful life in West Africa into slavery in South Carolina in 1807.

Evocatively blending elements of traditional opera with West African melodies, Omar stars Jamez McCordle in his company debut and is set in the hinterland of memory and imagination, presenting the characters he encountered on his journey and the solace of his faith in the face of his stolen life.

Sung in English with English Subtitles

Two hours and 15 minutes, including one intermission.

Sound good to you? Share this page on social media and let your friends know about Los Angeles Opera - Omar at Dorothy Chandler Pavilion.