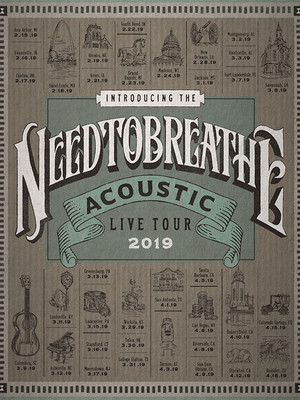 Needtobreathe is hitting the road once more in 2019, doing what they do best and bringing their music to their fans. This extensive new tour will see the band supporting their November 2018 release, 'Acoustic Live Vol. 1', their first-ever acoustic album, which sees the Christian group head in a new, introspective direction.

First coming to mainstream notice when their 2014 album, Rivers In The Wasteland, saw the band grab their first Grammy Award nomination. It also topped the Billboard's Top Rock Album and Top Alternative Albums chart, as well as earning them their highest charting single with "Brother" which featured Gavin DeGraw. Since then, the band became widely acknowledged for their alt-rock dynamic. Don't miss this exciting new acoustic tour, a chance to see the band stripped back and at their most introspective.

ALL of the staff was EXCELLENT. Can't speak highly enough about them.... more

Kevin: “Rock-n-Roll with a touch of Jesus”

Outstanding musicians that put on a highly entertaining show. In an age... more

Sound good to you? Share this page on social media and let your friends know about Needtobreathe at Fox Performing Arts Center.