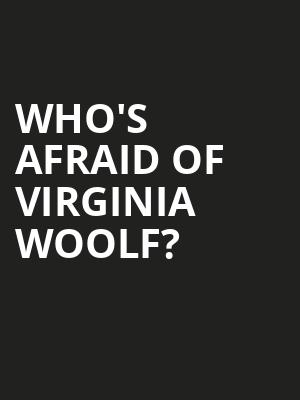 Who's Afraid of Virginia Woolf?

Arguably Edward Albee's most famous and most vicious masterpiece.

Why See Who's Afraid of Virginia Woolf??

Theatre's most dysfunctional married couple are born anew at the Geffen Playhouse in 2022, celebrating both the play's 60th anniversary and its Geffen premiere. Starring Calista Flockhart and Zachary Quinto, now's the time to experience the marital discordance of George and Martha, and the psychological games they begin with their naive new friends.

First appearing in 1962 and winning the Tony Award for Best Play the following year, Who's Afraid of Virginia Woolf? is certainly one of Albee's most noted works, with the scathing story of a declining relationship retaining relevance for each generation of audiences. In 1966 Director Mike Nichols immortalized both the play and the famously tempestuous relationship of its stars, Elizabeth Taylor and Richard Burton.

After a party at the university where each of them works, middle-aged George and Martha arrive home with a younger couple, Nick and Honey, in tow. Invited by Martha and to the chagrin of George, the two soon find themselves witness to the older couple's increasingly worrying relationship dynamic. Over three acts Nick and Honey go from horrified observers to finding themselves in the middle of a war of words, becoming unwitting players in a full-blown marital breakdown, with explosive consequences.

Photo by Nima Izadi on Unsplash

Wendy Rader: “So happy live theatre is back but…”

Calista Flockhart was horribly miscast. And I love live theatre. The surrounding... more

Sound good to you? Share this page on social media and let your friends know about Who's Afraid of Virginia Woolf? at Gil Cates Theater at the Geffen Playhouse.