Great Western Forum has been renamed the The Forum

Please visit our The Forum pages for information, show schedules and tickets. 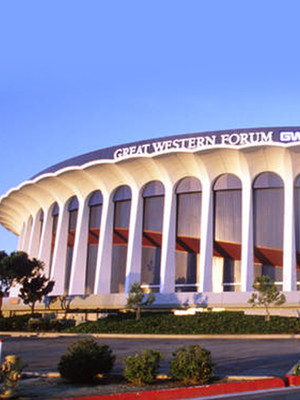 The Great Western Forum is a multi-purpose indoor arena in Inglewood, California. In 2012, the Forum was bought by the Madison Square Garden Company, and along with Madison Square Garden, it was one of the most well-known indoor sports venues in the U.S. It was the home of the NBA's Los Angeles Lakers and the NHL's Los Angeles Kings, from 1967 to 1999, and also to the WNBA's Los Angeles Sparks, from 1997 to 2001. The MSG has planned to renovate the Forum for use as a concert venue.The Forum was listed in the National Register of Historic Places in 2014.