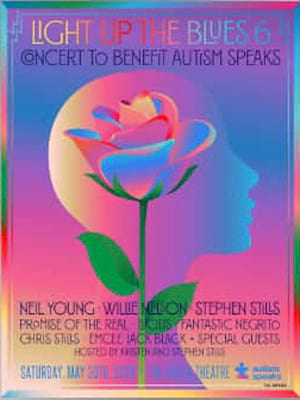 Light Up The Blues

Why See Light Up The Blues?

The annual Light Up The Blues concert plays LA, this time at the Pantages Theatre. A galaxy of guitar-wielding stars will perform on the night, all in aid of Autism Speaks, the world's leading autism advocacy organization.

Topping the bill is Neil Young, one of rock musics' most revered artists. The Canadian singer-songwriter began his music career in in the 1960s with his band Buffalo Springfield, a venture which earned him his second place on the Rock and Roll Hall of Fame. The first was earned through his work as a solo artist, which has included such records as After the Goldrush and Harvest.

Sound good to you? Share this page on social media and let your friends know about Light Up The Blues at Greek Theater.