Sorry! You missed Coco - A Live to Film Concert Experience at Hollywood Bowl 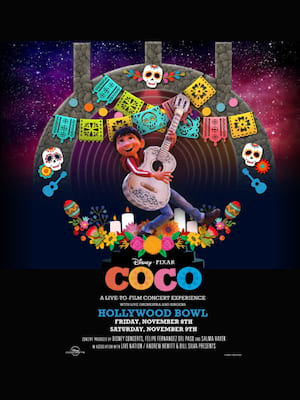 A boy who wants to become a musician against the wishes of his family ends up in the Land of the Dead in this engaging, spectacular animation

Why See Coco - A Live to Film Concert Experience?

A Live Screening Of Coco At The Hollywood Bowl

Upon its release in early 2018, the rollicking musical adventure Coco not only paid a tender tribute to the proud traditions of Mexico but turned out to be a box office smash hit that revitalised the historic animation studio Pixar. Just in time for the Dia de los Muertos festivities, it now comes to vivid life on the Hollywood Bowl stage replete with a special live HD screening, live orchestral accompaniment and performances by the likes of Eva Longoria, Miguel, Benjamin Bratt, Lele Pons, Alex Gonzales and more!

Whilst its subject matter may deal with death, Coco still manages to be life affirming and utterly charming. Michael Giacchino's Mexican traditional music-infused score, which includes the film's endearing lead anthem Remember Me, punctuates the tale of pint-sized hero Miguel, a young boy with dreams of becoming a famous musician. When his family forbids it, he breaks into the mausoleum of guitar icon Ernesto de la Cruz to borrow the instrument, an action that caused him to undertake a whirlwind journey into the Land of The Dead.

Sound good to you? Share this page on social media and let your friends know about Coco - A Live to Film Concert Experience at Hollywood Bowl.