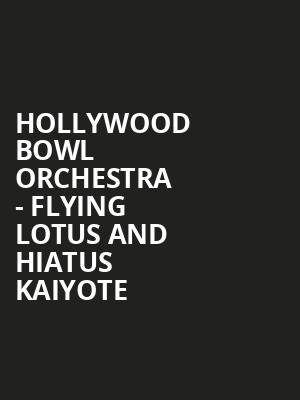 Photo by Daniel Olah on Unsplash

The perfect summer concert team up

It's time for a laid-back night of eclectic beats as producer Flying Lotus teams up with Aussie jazz-funk outfit Hiatus Kaiyote for this one-off genre-bending event at the Hollywood Bowl this summer. Perfect for fans of both performers, don't miss what is sure to be one of the highest-rated team-ups at the venue this year.

Flying Lotus
Flying Lotus' constant exploration has allowed him to become a key figure in the US music industry, known for his impressive and immersive shows audiences will certainly feel as explorative and inspired as Lotus himself.

Hiatus Kaiyote
Melbourne natives and Future Soul innovators Hiatus Kaiyote describe their sound as "multi-dimensional", "polyrhythmic" and "gangster" - their love of genre-bending and blending certainly does make it difficult to pin down. Led by the enigmatic and eclectic vocalist/guitarist Nai Palm, the quartet burst onto the international scene in 2013 with their critically acclaimed debut album Tawk Tomahawk. Fans of the band include Questlove, Erykah Badu and Q-tip.

Sound good to you? Share this page on social media and let your friends know about Hollywood Bowl Orchestra - Flying Lotus and Hiatus Kaiyote at Hollywood Bowl.