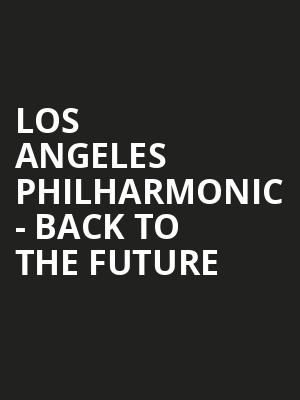 Los Angeles Philharmonic - Back to the Future

Why See Los Angeles Philharmonic - Back to the Future?

It's time to go back, Back to the Future with the LA Philharmonic as they mount a live-to-screen concert at the Hollywood Bowl this august! See the 80s sci-fi classic on the big screen, accompanied by Alan Silvestri's iconic score played. One of the most iconic movies of the '80s, Back To The Future stars Christopher Lloyd as The Doc and Michael J. Fox as his trusty sidekick Marty. Can this unlikely duo save Marty's family and the future itself? Well, we think you know they can - but you'll have a whole lotta fun on the ride!

Directed by Robert Zemeckis and produced by Steven Spielberg, Back to the Future, along with its two sequels, defined blockbuster filmmaking in the 1980s. A dazzling mix of comedy, adventure and sci-fi, it remains a firm family favorite to this day.

Sound good to you? Share this page on social media and let your friends know about Los Angeles Philharmonic - Back to the Future at Hollywood Bowl.