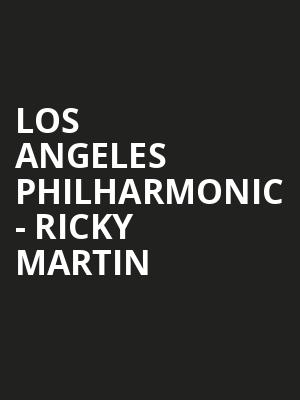 Photo by Martin Adams on Unsplash

Shake your hips, move those feet - Ricky's coming to town!

It's time to live La Vida Loca as international Latin Pop King Ricky Martin heats up the Hollywood Bowl with this much-anticipated appearance. A born performer, Martin's sizzling dance moves and thumping Latin-infused anthems are perfect for blowing out the cobwebs and getting you up on your feet in what is sure to be a memorable Bowl debut!

Ricky Martin grew up in the spotlight, from his early beginnings with the boy-band Menudo to a stellar solo career that has seen the sale of 85 million albums worldwide, most of those albums certified platinum, and a host of awards including a staggering six Grammy Awards, not to mention all those number one singles! Hailed as the leader of the Latin pop revolution of the late 90's, Martin's success enabled the crossover of Spanish artists into the English market.

Sound good to you? Share this page on social media and let your friends know about Los Angeles Philharmonic - Ricky Martin at Hollywood Bowl.