Sorry! You missed Netflix Is A Joke Fest - Dave Chappelle at Hollywood Bowl 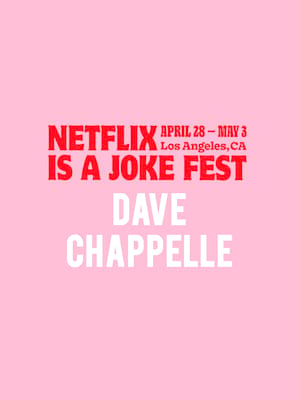 Magnetically compelling... If there are comics with more onstage charisma than Dave Chappelle, I haven't seen them.

Why See Netflix Is A Joke Fest - Dave Chappelle?

With an increasing number of stand-up specials made especially for its roster (over 200 can be found on-site already), it makes sense that streaming heavyweight Netflix is taking its golden comedy formula to the stage. Taking place from Monday, April 27th to Sunday, May 3rd, the first-ever Netflix Is A Joke Fest will leave LA in stitches at over 100 venues citywide, featuring the biggest and brightest established comics, as well as up and coming performers that are just itching to be discovered by new fans. Don't miss the one and only Dave Chapelle during Chapelle's - an evening of comedy, music and special guests at the Hollywood Bowl, May 2nd.

Making a name for himself on the New York comedy circuit from the early 90s, the comedian began gaining popularity at an unprecedented pace hitting the big time with Chappelle's Show on Comedy Central in 2003. Following the show, Chappelle made a few rare TV and stand-up appearances until 2013, when he returned to the comedy circuit. Since then the streetwise stand up's career has hit milestone after milestone, including two Emmy awards and two Grammy awards for his TV appearances and comedy albums.

Sound good to you? Share this page on social media and let your friends know about Netflix Is A Joke Fest - Dave Chappelle at Hollywood Bowl.