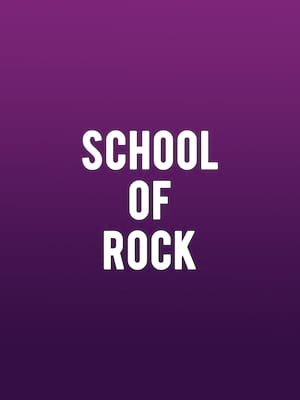 School of Rock is sweet and earnest at its finest, focusing on impossible-to-resist children passionate and thrilled to be rocking the main stage

Why See School of Rock?

Rock and Roll at the Hollywood Bowl

Brimming with pre-teen rebellion, boundless spirit, rollicking rock and roll tunes like 'Math is a Wonderful Thing' and 'Stick It to the Man', the faithful and fun adaptation has been embraced by millennials who grew up with the original, families and theatre fans the world over. Expect flaming licks, promising pint-sized performers and Lloyd-Webber's trademark OTT melodies, vibrato and balladry.

WHAT IS SCHOOL OF ROCK ABOUT?

The adventure begins when down-on-his-luck rock god wannabe Dewey Finn is kicked out of No Vacancy, the band he started, for trying to upstage the lead singer. Things get much worse when his roommate Ned and Ned's domineering girlfriend Patti demand the rent he owes, and to top it off, he's fired from his job at the record store.

When he gets a phone call from the prestigious Horace Green Prep School, Dewey assumes Ned's identity and begins to teach at the school. Soon realizing the kids are pretty talented, he hatches a plan to win a local Battle of the Bands competition that may not go down too well with the school board.

Seen School of Rock? Loved it? Hated it?

Sound good to you? Share this page on social media and let your friends know about School of Rock at Hollywood Bowl.