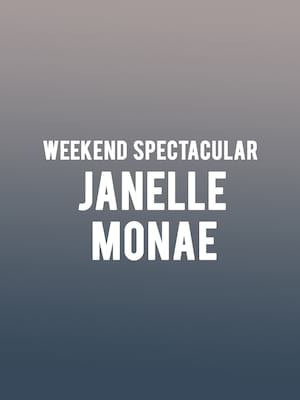 With Monae and band at times coming over like a modern, female-fronted version of Prince and the Revolution, her music seems to dip into soul, P-Funk, blues, electronica, New Orleans jazz, pop and ragtime, while providing a vehicle for her agenda and her

Eight-time Grammy-nominated singer-songwriter, producer and rapper Janelle Monae first broke the modern pop mold with her bold debut The ArchAndroid, a concept album that blended afro-futurism, killer hooks and a sci-fi aesthetic. Going on to capturing the essence of the sensual neo-soul funk stylings of Prince in his prime, as well as the watertight songwriting of Stevie Wonder, Lauryn Hill and Michael Jackson, Monae's sonic journey has seen the dismantling of the patriarchy in her lyrical content, the championing of the feminine form and the celebration of what it means to be queer, black and feminist in today's mixed-up world. Known for her theatrical live shows, Monae joins forces with the Hollywood Bowl Orchestra and conductor Thomas Wilkins for two special concerts at the Bowl.

Sound good to you? Share this page on social media and let your friends know about Weekend Spectacular - Janelle Monae at Hollywood Bowl.