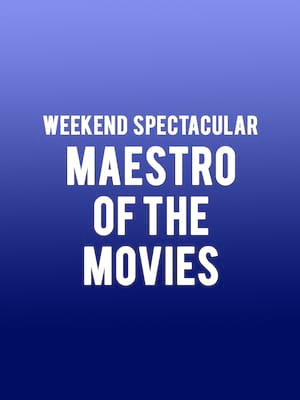 Weekend Spectacular - Maestro of the Movies

Everyone has been touched by the music of John Williams; we've all cowered behind our eyes at Jurassic Park, shed a tear at Schindler's list, and got our first glimpse of the magical world in Harry Potter through his film scores

Why See Weekend Spectacular - Maestro of the Movies?

A Sonic Celebration of the Music of John Williams

Influential composer John Williams returns to the Bowl to bring his best-loved scores to life with the help of fellow conductor David Newman and the Los Angeles Philharmonic. With a career spanning over six decades,  Williams has composed some of the most popular and recognizable scores in cinematic history. Earning himself 51 Academy Award nominations, and winning 25 Grammy Awards with his incredible pieces of music, he's provided the iconic sounds of Harry Potter, Star Wars, E.T, Jurassic Park, and Indiana Jones amongst other classics!

Sound good to you? Share this page on social media and let your friends know about Weekend Spectacular - Maestro of the Movies at Hollywood Bowl.