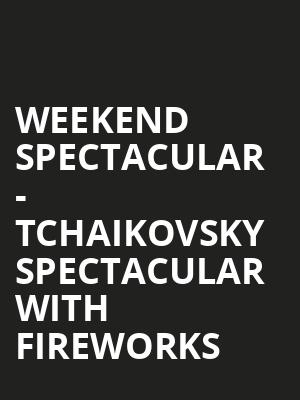 When bidding farewell to summer, one may as well do so with a bang-in this case both figuratively and literally. Tchaikovsky. Fireworks.

The Hollywood Bowl's Weekend Spectacular Series is almost as iconic as the historic venue itself. The toast of Los Angeles' summer entertainment season, the show-stopping outdoor concerts feature the biggest and brightest names in pop, R&B, classical music and even special HD screenings of blockbuster feature films. And of course, no Weekend Spectacular would be complete without the Hollywood Bowl fireworks display - with as much thought put into the show in the sky as the one going on below, the dazzling pyrotechnics up the ante for a memorable evening you won't soon forget.

An annual tradition in its own right, Grammy Award-winning conductor extraordinaire Bramwell Tovey leads the Los Angeles Philharmonic and the USC Trojan Marching Band in the delayed 50th-anniversary concert of the Tchaikovsky Spectacular. The beloved program highlights the genius of the great Russian romantic composer during rousing renditions of the Polonaise and Waltz from opera Eugene Onegin, Swan Lake, Capriccio Italien and of course, show-stopping finale the 1812 Overture.

Sound good to you? Share this page on social media and let your friends know about Weekend Spectacular - Tchaikovsky Spectacular with Fireworks at Hollywood Bowl.