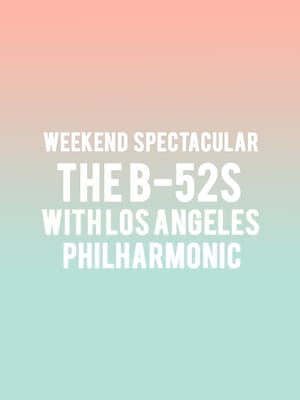 Why See Weekend Spectacular - The B-52s with Los Angeles Philharmonic?

The B-52s Shake Things Up At The Bowl

Returning to the Bowl, high octane performers The B-52s join forces with the Los Angeles Philharmonic, conductor Thomas Wilkins and support act Berlin for two special night only. Hailing from Atlanta, Georgia, the outrageous music makers are New Wave royalty, emerging with their kitschy eponymous debut album that featured the tracks Rock Lobster and Planet Claire. They later went on to achieve mainstream domination late in the decade with the huge hit Love Shack in 1989.

Sound good to you? Share this page on social media and let your friends know about Weekend Spectacular - The B-52s with Los Angeles Philharmonic at Hollywood Bowl.