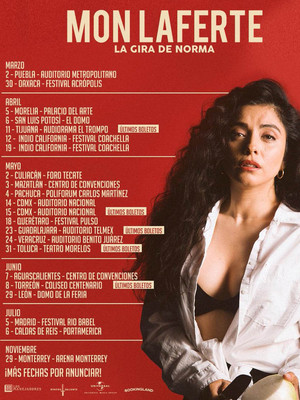 Chilean superstar Mon Laferte is heading to the US this summer as she presents her headling tour, La Gira De Norma. Famed for her fearless take on Latin Alternative Rock, Mon Laferte has already garnered three multi-platinum selling albums in her native Chile, this debut headline US tour marks the singer-songwriters continuous rise to global stardom.

Debuting in 2003 when she appeared in Chilean talent show Rojo, then under the name of Monserrat Bustamente, Mon Laferte quickly became a Chilean favorite. After a battle with cancer in 2009, the singer-songwriter saw the opportunity to re-brand herself, and thus Mon Laferte was born! Releasing two albums (Desechable and Tornasol) independently, in the mid-noughties which went relatively unnoticed Mon Laferte broke through to South American acclaim with her 2015 album, Mon Laferte Vol. 1. Since then the rock-star's career has only been on the up, with all her subsequent albums hitting multi-platinum status in both Chile and Mexico!

With her sixth album, Norma, landing in the Top Ten in the US Latin Pop charts and the Top 30 in the US Latin Charts, Mon Laferte is crossing musical borders, bringing her powerful vocals and unique style to fans across the USA. Don't miss your chance to see her live!

Sound good to you? Share this page on social media and let your friends know about Mon Laferte at Hollywood Palladium.