Sorry! You missed Netflix Is A Joke Fest - Hosted by Martin Lawrence at Hollywood Palladium 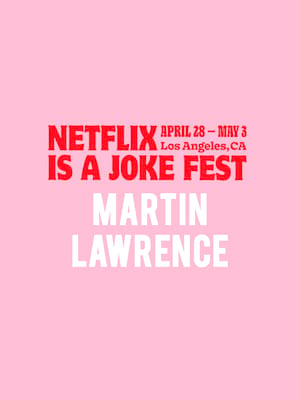 Netflix Is A Joke Fest - Hosted by Martin Lawrence

Watching Martin Lawrence in action is often like watching an entire comedy troupe instead of just one man. Many comedians can only master one stage personality; Lawrence has several and will pack more entertainment into one night than anyone else.

Why See Netflix Is A Joke Fest - Hosted by Martin Lawrence?

With an increasing number of stand-up specials made especially for its roster (over 200 can be found on-site already), it makes sense that streaming heavyweight Netflix is taking its golden comedy formula to the stage. Taking place from Monday, April 27th to Sunday, May 3rd, the first-ever Netflix Is A Joke Fest will leave LA in stitches at over 100 venues citywide, featuring the biggest and brightest established comics, as well as up and coming performers that are just itching to be discovered by new fans. Don't miss eminent host Martin Lawrence at the Hollywood Palladium, April 30th.

Hailed as the original Bad Boy of comedy is may have a successful career in stand up, film and Tv behind him, but the actor/comedian/singer isn't one to rest on his laurels, regularly hitting the road on national tours.  Outspoken on subjects such as relationships and family, and a vocal opponent to police brutality, Lawrence's raw style shows no sign of mellowing as we head into the new decade. Be warned - this comic takes no prisoners at his shows!

Sound good to you? Share this page on social media and let your friends know about Netflix Is A Joke Fest - Hosted by Martin Lawrence at Hollywood Palladium.