Sorry! You missed Lany at House of Blues 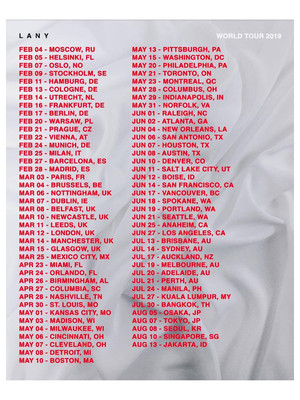 Formed in of Nashville, Tennessee in 2014, Paul Jason Klein, Leslie Priest and Jake Goss took on a broader musical view than the country roots of the city, dubbing their band LANY in reference to the two cities (Los Angeles and New York) and their aspiration of spreading their heady indie pop sound from coast to coast. The outfit are riding high after the release of their critically acclaimed sophomore album Malibu Nights and are set to achieve their far flung goals, bringing the albums dreamy synth-pop goodness to stages across the world during the mammoth Malibu Nights World Tour 2019.

Mixing shades of 90s R&B with 80s synth pop, LANY balance catchy, ear-burrowing hooks with thoughtful lyrics that mine the depths of desire, relationships and heartbreak without ever becoming too melancholic or indulgent thanks to their upbeat, anthemic musical underpinnings. When it comes to translating their emotional offerings to live performances, frontman and guitarist Klein's falsettos and riffs are just as, if not more, heart-melting than on record, and altogether the trio's high energy performance is enough to knock the socks off any receptive crowd.

Seen Lany? Loved it? Hated it?

Sound good to you? Share this page on social media and let your friends know about Lany at House of Blues.