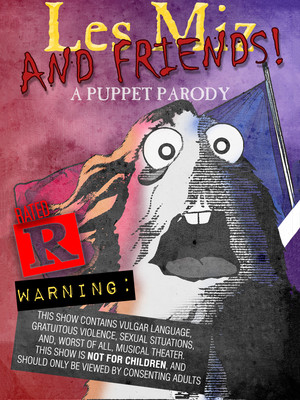 Why See Lez Miz and Friends! A Puppet Parody?

Do you hear the puppets sing?

Following a successful run in Orange County, Les Miz and Friends!: A Puppet Parody is headed to Hollywood for a limited run between April 5-May 11. Both a loving tribute to and a brutal deconstruction of the Broadway classic, enjoy the antics of a group of foul-mouthed puppets who overthrow a human production of Les Miserables and decide to start a revolution of their own.

Written and directed by comedy partners Nathan Makaryk and Genevieve Flati - who double as the raucous Master and Mistress of the House, the Thenardiers - this irreverent parody lampoons every aspect of the famous musical, movie, and novel.

Playing the Hudson Theater Mainstage for six weeks only (while the Broadway tour is also docked at The Pantages), both Les Miserables enthusiasts and haters alike will love the show, which features new versions of classic songs, tons of improvisation and audience interaction. So don't leave it till you have one day more - secure your ticket today!

This production contains offensive language, sexual situations, and musical theater. It should not be viewed by children.

One hour and 50 minutes with one intermission

Seen Lez Miz and Friends! A Puppet Parody? Loved it? Hated it?

Sound good to you? Share this page on social media and let your friends know about Lez Miz and Friends! A Puppet Parody at Hudson Theater Mainstage.