You can catch Storm Large at Baby Grand in Wilmington, showing Apr 8, 2020

Storm Large is also touring to: 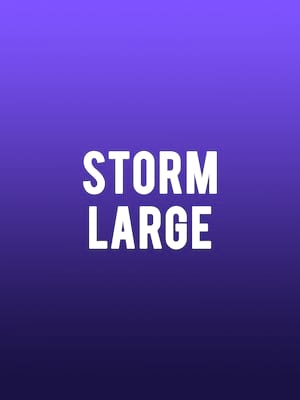 Storm Large (her real name, by the way) is a force of nature, not to be missed. It was as if Janice Joplin and Gwen Stefani had a baby, and Samantha Bee was the godmother.

Truly a force to be reckoned with when she steps out on the stage, Pink Martini vocalist Storm Large and her larger than life personality are hitting the road. Large's considerable vocal pipes first drew international attention when she rocked out on the CBS reality competition Rockstar: Supernova in 2006, later transforming from rock chick into a sultry old school jazz singer during her time with big band swingers Pink Martini and a successful solo career with backing band Le Bonheur.

Crafting a cabaret set filled with razzle-dazzle show tunes, scintillating story-telling and own takes on hard-core punk love ballads, Large's concert is anything but your run-of-the-mill supper club show. Her solo material is equally unorthodox and includes a hauntingly beautiful song about an ax-murderess who dies in an asylum... Somehow, Large brings it all together with a vocal range that soars from alto to soprano with raw power, imbuing her performances with a je ne sais quoi that screams star quality.

Sound good to you? Share this page on social media and let your friends know about Storm Large at Irvine Barclay Theatre.