Sorry! You missed One OK Rock at Majestic Ventura Theater 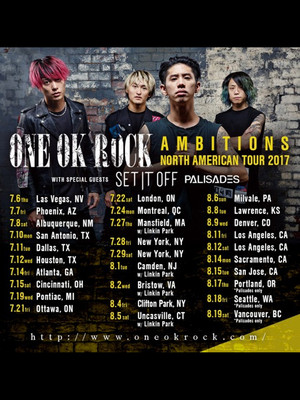 For this album we challenged and pushed ourselves to try new things while still maintaining the essence of what our band is. I believe you will hear some things you have never heard from ONE OK ROCK.

Why See One OK Rock?

Eye of the storm tour

Japan's answer to Blink 182 and Foo Fighters combined, One OK Rock (pronounced with a Japanese accent as one 'o clock) graduated from underground venues with the release of their first single Naihishinsho in 2007, finding themselves selling out stadium shows in Asia with every subsequent release. Their brand new studio album Eye of The Storm is no exception. Don't miss them on their new North American Tour in 2019 with special guests Waterparks and Stand Atlantic in support. Boasting a more contemplative sound than debut Ambitions, Eye Of The Storm is led by infectious pop-rock anthem 'Stand Out Fit In'.

Combining electro-pop, pop rock riffs, melody, and driving drums, the outfit is known for high-energy shows featuring pyrotechnic spectacles and retina-burning light effects. But don't pigeonhole them, they recently wrapped a tour of Japan where they were accompanied by a full orchestra at each stop!

Seen One OK Rock? Loved it? Hated it?

Sound good to you? Share this page on social media and let your friends know about One OK Rock at Majestic Ventura Theater.