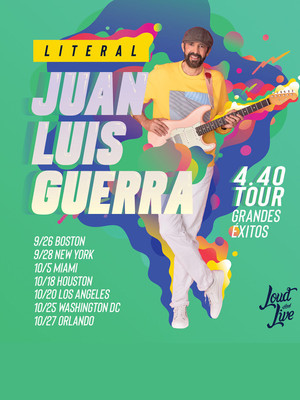 Grammy and five-time Latin Grammy recipient Juan Luis Guerra is one of the most internationally-recognized Latin music stars.

Grammy and five-time Latin Grammy recipient Juan Luis Guerra is one of the most internationally-recognized Latin music stars. The Dominican musician is known worldwide for his infectious fusion-laced renditions of merengue and bachata, backed by one of the best live bands in the Spanish speaking world.

The Caribbean rhythms of Guerra's homeland translate to an upbeat party atmosphere on stage and it's impossible not to move your feet when he unleashes his clave beats and sonorous vocals. If music is the language of love, then Spanish comes in a close second, for Guerra is also a gifted romantic. In one song, the crooner recalls the beauty of his lovers, comparing them to the moon and stars. In another, the sound of a woman's laughter is greater than a symphony. Guerra moves audiences in two ways - on the dancefloor and in their hearts.

Sound good to you? Share this page on social media and let your friends know about Juan Luis Guerra at Microsoft Theater.