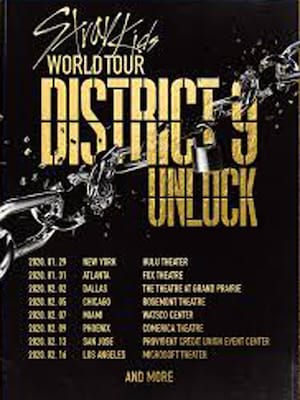 ...the guys compose all their own material, and excel at bringing a welcome sense of hookiness to even the most swag-filled hype tracks.

Formed after winning the popular reality TV competition of the same name in 2017, Stray Kids fuses the budding talents of Bang Chan, Woojin, Lee Know, Hyunjin, Felix, Changbin, Hand, Felix, I.N. and Seungmin with a carefree wild image that reflects their moniker. Following a successful stateside tour in 2019, the K-pop group return with their World Tour District 9: Unlock Tour, which will see them visiting cities including New York, Chicago, Miami and more!

Throwing down the gauntlet with their first ever release 'District 9' in early 2018, Stray Kids presented a whirlwind riot of hip hop and rock-tinged bubblegum pop in its instant crowd-pleasing anthems. Emotive, singable choruses, anthemic electric guitars, soaring ballads and killer rhymes populate their growing catalogue of songs, marking them an exciting new force in K-Pop.

Sound good to you? Share this page on social media and let your friends know about Stray Kids at Microsoft Theater.