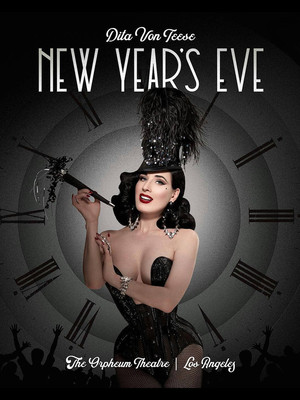 Bid a glamorous farewell to 2019 in the company of the reigning Queen of Burlesque Dita Von Teese at the City Of Angels' Orpheum Theatre, this December 31st. Inspired by a dream to throw a legendary New Year's Eve gala that evokes the heyday of Hollywood's Golden Age, the sultry siren will return to the historic venue, reveling in its rich showbiz, vaudeville and burlesque history, and opulent, luxuriant surroundings.

Hailed as the best burlesque performer in the world, Von Teese has proved a force-to-be-reckoned-with both on and off the stage, with a creative reach that extends to live entertainment, fashion, fetish culture, music, and publishing. A modern pin-up icon, her scintillating dances perfectly balance classiness, grace, and sensuality. As well as a Von Teese performance, modern burlesque's rising stars, and a dazzling costume and haute couture display round off the evening's program. Put on your Sunday best and soak up the sophisticated reverie with Dita and company!

Sound good to you? Share this page on social media and let your friends know about Dita Von Teese at Orpheum Theater.