Sorry! You missed Netflix Is A Joke Fest - Jack Whitehall at Orpheum Theater 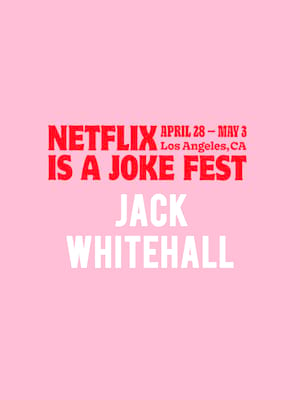 Why See Netflix Is A Joke Fest - Jack Whitehall?

With an increasing number of stand-up specials made especially for its roster (over 200 can be found on-site already), it makes sense that streaming heavyweight Netflix is taking its golden comedy formula to the stage. Taking place from Monday, April 27th to Sunday, May 3rd, the first-ever Netflix Is A Joke Fest will leave LA in stitches at over 100 venues citywide, featuring the biggest and brightest established comics, as well as up and coming performers that are just itching to be discovered by new fans. Don't miss English comedian Jack Whitehall at the Orpheum Theatre, May 2nd.

Fast becoming a household name, Whitehall (and his brand of posh-manchild humor) has forged a career not only as a stand-up, but as a film and TV actor, presenter and writer. Career highlights include smash-hit Netflix roadtrip show Travels With My Father and roles on Disney's The Nutcracker, Good Omens and Jungle Cruise. Rude, crude and constantly shocking himself, his distinctly British comedy constantly walks the line between intelligent and entertainingly silly.

Sound good to you? Share this page on social media and let your friends know about Netflix Is A Joke Fest - Jack Whitehall at Orpheum Theater.