Sorry! You missed Netflix Is A Joke Fest - Schitt's Creek The Farewell Tour at Orpheum Theater 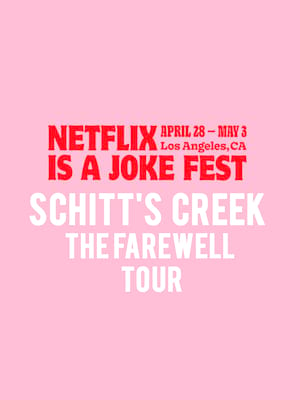 Netflix Is A Joke Fest - Schitt's Creek The Farewell Tour

...an amiable and deliriously funny series - a portrait of a bunch of spoiled jerks softening in new surroundings

Why See Netflix Is A Joke Fest - Schitt's Creek The Farewell Tour?

With an increasing number of stand-up specials made especially for their roster (over 200 can be found on-site already), it makes sense that streaming heavyweight Netflix is taking its golden comedy formula to the stage. Taking place over from Monday, April 27th to Sunday, May 3rd, the first-ever Netflix Is A Joke Fest will leave LA in stitches at over 100 venues citywide, featuring the biggest and brightest established comics, as well as up and coming performers that are just itching to be discovered by new fans. Don't miss the festival's edition of the Schitt's Creek Farewell Tour at The Orpheum, May 1st.

Created by award-winning comedian/actor Eugene Levy and his son Dan Levy, cult hit Schitt's Creek first appeared on Netflix in 2015 and quickly amassed a loyal following. Now in its final season, the sitcom spun a familiar trope on its head - it revolves around a family of millionaires who have to relocate to Schitt's Creek, a small town they once purchased for laughs, after they lose their fortunes. The tour gives fans a chance to get an inside scoop on how the show is made, as well as interact with cast members including the Levys, Catherine O'Hara and Annie Murphy.

Sound good to you? Share this page on social media and let your friends know about Netflix Is A Joke Fest - Schitt's Creek The Farewell Tour at Orpheum Theater.