Sorry! You missed An Evening with Ben Folds: A Conversation at Regent Theatre 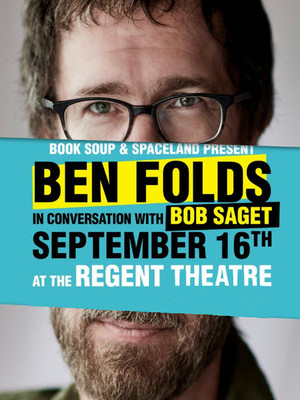 An Evening with Ben Folds: A Conversation

Why See An Evening with Ben Folds: A Conversation?

Musician Ben Folds swaps from piano keys to laptop keys this year as he launches his first book - A Dream About Lightning Bugs: A Life of Music and Cheap Lessons. A memoir that echoes the celebrated artist's witty wordplay and wistful hits, learn more about Ben from his childhood to worldwide success in this exciting conversational evening, hosted by comedian Bob Saget.

The frontman of his self-named band, rock artist and producer Ben Folds continues to work with some of the most eclectic names in music and entertainment (remember his Common People cover that featured William Shatner and Bill Clinton?), as well as pushing the envelope on alt-rock ever further. A self-confessed enigma, he prefers to stay out of the limelight except when touring, but can easily claim credit for some of music's most unlikely trends. Don't miss him in this intimate evening at the Regent this fall.

Sound good to you? Share this page on social media and let your friends know about An Evening with Ben Folds: A Conversation at Regent Theatre.