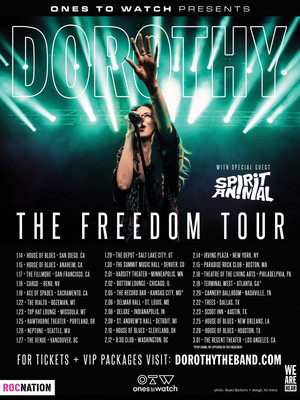 Dorothy Martin, lead singer of L.A. band Dorothy, is one of those rare talents.

Dorothy Returns With A Vengeance

Following a Summer spent dominating North America's biggest festivals like Summerfest, Lollapalooza and Voodoo Festival, hard rocking neo blues quintet Dorothy continue their quest to keep the spirit of rock and roll alive and kicking during the 2019 edition of their Freedom Tour. The outfit formed in 2014 when singer Dorothy Martin was introduced to instrumentalists and production duo Mark Jackson and Ian Scott, and the duo were immediately were drawn to the fiery frontwoman's powerhouse vocals, pairing it with old school metal riffs and a simple rhythm section.

Calling to mind AC/DC, Led Zep and Sabbath, these modern musos raise hell in the style of their influences but carry the torch into the future with polished production values and a pop penchant for writing hook-laden choruses and soaring anthems. A tour de force performer, Dorothy's set is built around its namesake, who takes to the stage with a sense of charisma and swagger that would put a prancing Robert Plant to shame. Her voice is raw, emotional and steeped in that 70s black magic, and in between her bone-shaking rock outs, Dorothy converses with the crowd, offering messages of self-love, support and positivity that mark her as a female empowerment icon who's carving a niche in a male dominated world and doing it with style.

Seen Dorothy? Loved it? Hated it?

Sound good to you? Share this page on social media and let your friends know about Dorothy at Regent Theatre.