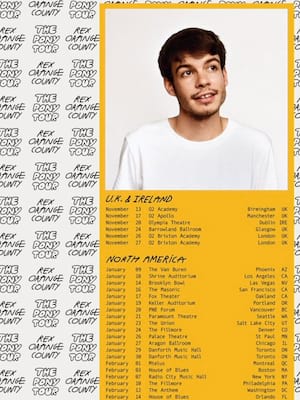 ...there's a broad pop scope to Rex Orange County's sound and a forthrightness to his words that feels genuinely exciting.

Rising indie-pop star Rex Orange County heads out tour in 2020 as he presents his latest album, Pony! With the album being released at the back end of 2019, Rex (a.k.a Alexander O'Connor) is ready to set the music world ablaze once again with his fusion of hip-hop, soul, electronica and jazz

In 2016, at the tender age of 18, Brit School graduate Alex O'Connor AKA Rex Orange County had been flying under the radar, quietly releasing his bedroom-produced tracks. However, when it emerged Odd Future leader Tyler The Creator was an ardent fan, Rex was found himself in America recording tracks for Tyler's 2017 album Flower Boy.

Marked as the next big thing ever since his collaboration with Tyler Rex Orange County self-released his second studio album Apricot Princess in 2017 which hit the top ten of the US album charts!

Sound good to you? Share this page on social media and let your friends know about Rex Orange County at Shrine Auditorium.