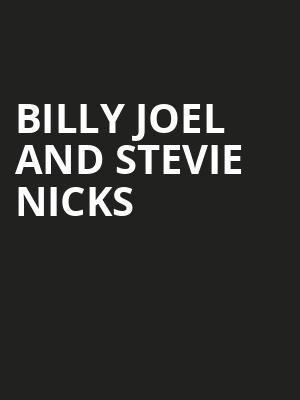 Stop the presses! In a match surely made in music heaven, Stevie Nicks and Billy Joel are teaming up for a handful of select dates, giving audiences the once-in-a-lifetime opportunity to experience these two rock legends together! With over 300 million in record sales between them, they both were some of the biggest and most recognizable artists of the 70s, carving out the musical landscape of the decade. Don't miss the chance to see them on the Two Icons, One Night tour!

Stevie Nicks
Possessing one of rock's most unmistakable voices, and a witchy stage persona all of her own, Nicks was responsible for some of Fleetwood Mac's greatest moments, including 'Landslide' and 'Rhiannon'. Comprised of songs written throughout her subsequent solo career, which had never been recorded for some reason or another, her last record , 2014's 24 Karat Gold was hailed as her best record since 1983's The Wild Heart. Co-produced by Dave Stewart, it has since sold over 100,000 copies in the USA alone

One of the highest-grossing touring artists in the world, Joel is currently in the middle of a Madison Square Garden series of monthly concerts, which has been extended numerous times due to huge demand. Among the cabinet full of awards that he's won over the years are six Grammys, a Kennedy Center Honor and the Gershwin Prize for Popular Song. His vast catalog of hits ranges from the upbeat pop of 'Uptown Girl' and 'Allentown' to the smoky late-night 'Piano Man' and the anthemic 'New York State of Mind'.

Seen Billy Joel and Stevie Nicks? Loved it? Hated it?

Sound good to you? Share this page on social media and let your friends know about Billy Joel and Stevie Nicks at SoFi Stadium.