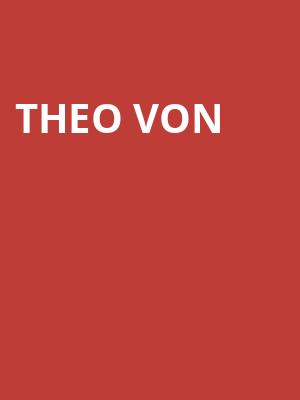 Comedian, podcaster, TV host and actor, is there anything Theo Von can't do?! Catch one of America's rising stars in action this spring as Theo Von heads out on his Dark Arts tour! Famed for his creation of CrankTexts.com (a website where the star gets into all sorts of weird and wonderful conversations with strangers), Theo Von began his varied career when he starred in MTV's hit series Road Rules.

When the show ended in 2007, Von headed to LA where he became the host of TBS' Deal With It before hosting Yahoo's daily recap show Primetime In No Time which drew in over one million viewers a day! Von has now cultivated a sparkling stand-up career, with a whole legion of fans behind him Von's podcast This Past Weekend has become one of the country's fastest-growing comedy podcasts.

Please note that some venues are age restricted, please check with the venue before purchasing tickets.

The lineup was great start to finish. A couple of ignornant assholes in... more

Zach: “THEO VON IS NEXT LEVEL”

I'm not sure that we'll be able to see Theo Von in this size venue again..... more

Sound good to you? Share this page on social media and let your friends know about Theo Von at Spotlight 29 Casino.