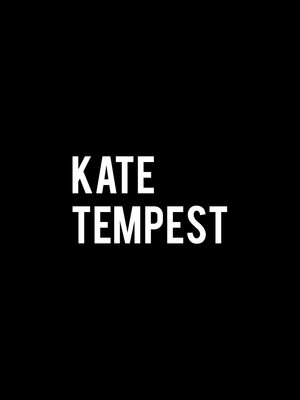 The performance poet absorbs all of the uncertainty and anger of our times, and pours it into ferocious, apocalyptic music that both wounds and heals

THE ENGLISH WORDSMITH HITS US SHORES

Words are Kate Tempest's medium of choice. From a young age she found refuge in both poetry and music, an affiliation that blossomed when she worked at a record store and attended the Brit School for Performing Arts, simultaneously catching the ear of the industry with her first live gigs as a teenager. Blending insightful lyrics and poetry with hip hop style beats and a searing social and political commentary on the world around her, it wasn't long before her spoken word music launched her to international claim and success.

With influencing range from Samuel Beckett to Wu Tang Clan, Tempest's bold mix of dramatic wordplay, music and visceral subject matter saw much acclaim with each subsequent release. Her sophomore effort Brand New Ancients won her the Ted Hughes Award in 2013, whilst Everybody Down and Let Them Eat Chaos both recieved Mercury nominations. Returning to music after spending her time writing novels and plays, she tours her latest record The Book Of Traps and Lessons, finding beauty in the breakdown of a tumultuous 2019.

Sound good to you? Share this page on social media and let your friends know about Kate Tempest at Teragram Ballroom.