Sorry! You missed Netflix Is A Joke Fest - 2 Bears 1 Cave Podcast (Tom Segura and Bert Kreischer) at The Wiltern 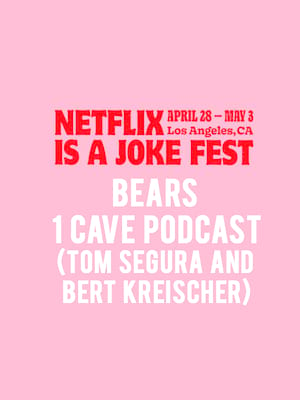 ...the way he observes human behavior, stores it away in his brain where it can stew into something entirely other, and then recounts that experience promises to be a surefire hit for any occasion.

With an increasing number of stand-up specials made especially for its roster (over 200 can be found on-site already), it makes sense that streaming heavyweight Netflix is taking its golden comedy formula to the stage. Taking place from Monday, April 27th to Sunday, May 3rd, the first-ever Netflix Is A Joke Fest will leave LA in stitches at over 100 venues citywide, featuring the biggest and brightest established comics, as well as up and coming performers that are just itching to be discovered by new fans. Don't miss Tom Segura and Bert Kreischer for a special live recording of the 2 Bears 1 Cave Podcast at The Wiltern, April 28th.

The brainchild of the professionally cranky yet loveable stand-up Tom Segura and the often shirtless storyteller Bert Kreisher, 2 Bears 1 Podcast sees the best friends come together in their very own bear cave at YMH Studios with one goal - to make each other laugh hysterically. Of course, they succeed thanks to fizzing punchlines, wry observations and off the wall topics.

Sound good to you? Share this page on social media and let your friends know about Netflix Is A Joke Fest - 2 Bears 1 Cave Podcast (Tom Segura and Bert Kreischer) at The Wiltern.