Sorry! You missed Netflix Is A Joke Fest - Chelsea Handler at The Wiltern 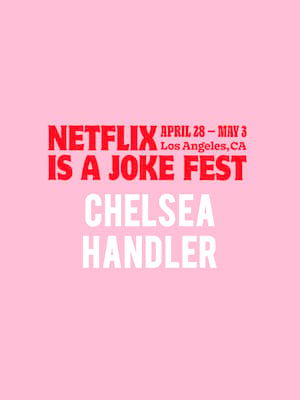 There aren't many authors who can lay claim to having five of their six books debut at No. 1 on the New York Times Bestseller List. Chelsea Handler can.

Why See Netflix Is A Joke Fest - Chelsea Handler?

With an increasing number of stand-up specials made especially for its roster (over 200 can be found on-site already), it makes sense that streaming heavyweight Netflix is taking its golden comedy formula to the stage. Taking place from Monday, April 27th to Sunday, May 3rd, the first-ever Netflix Is A Joke Fest will leave LA in stitches at over 100 venues citywide, featuring the biggest and brightest established comics, as well as up and coming performers that are just itching to be discovered by new fans. Don't miss the festival's edition of the Chelsea Handler's Life Will Be The Death Of Me Tour at The Hollywood Palladium, May 2nd.

A comedian, author and activist, Handler is renowned for her no-holds-barred stand-up comedy and engaging conversational style - no topic is taboo! Her latest nationwide jaunt supports her hit autobiography/memoir of the same name, which leaves no stone unturned in its quest through adulthood, childhood trauma and the black comedy that exists in between. Join Handler for a brilliant night of stand-up, covering topics close to her heart - from Donald Trump to her two beloved pet dogs!

Sound good to you? Share this page on social media and let your friends know about Netflix Is A Joke Fest - Chelsea Handler at The Wiltern.