Sorry! You missed Netflix Is A Joke Fest - Park Na-rae at The Wiltern 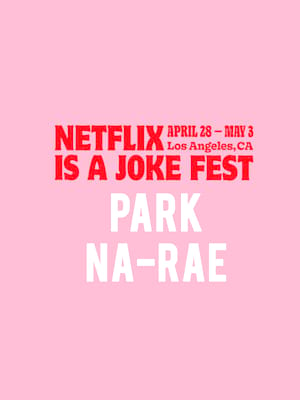 Endearing. Yet shameless and brash. She knows no limits - and she promises candid talk that dares to bare it all

Why See Netflix Is A Joke Fest - Park Na-rae?

With an increasing number of stand-up specials made especially for its roster (over 200 can be found on-site already), it makes sense that streaming heavyweight Netflix is taking its golden comedy formula to the stage. Taking place from Monday, April 27th to Sunday, May 3rd, the first-ever Netflix Is A Joke Fest will leave LA in stitches at over 100 venues citywide, featuring the biggest and brightest established comics, as well as up and coming performers that are just itching to be discovered by new fans. Don't miss Park Na-rae at The Wiltern, April 29th.

Hailing from South Korea, Park Na-rae made her stand up debut on popular comedy sketch show Gag Concert in 2005, and immediately became a staple on the variety show scene. Her no-holds-barred humor soon found her working the live comedy circuit and thanks to her frank (and hilarious) handling of topics like sex, relationships and celebrity life, she's now South Korea's favorite sassy, raunchy and loveable big sister.

Please note: This stand-up show is performed in Korean.

Sound good to you? Share this page on social media and let your friends know about Netflix Is A Joke Fest - Park Na-rae at The Wiltern.