Sorry! You missed Netflix Is A Joke Fest - The Degenerates Live hosted by Jim Jefferies at The Wiltern 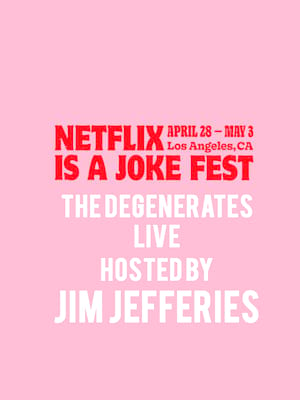 The Standard on Jim Jefferies

Why See Netflix Is A Joke Fest - The Degenerates Live hosted by Jim Jefferies?

With an increasing number of stand-up specials made especially for its roster (over 200 can be found on-site already), it makes sense that streaming heavyweight Netflix is taking its golden comedy formula to the stage. Taking place from Monday, April 27th to Sunday, May 3rd, the first-ever Netflix Is A Joke Fest will leave LA in stitches at over 100 venues citywide, featuring the biggest and brightest established comics, as well as up and coming performers that are just itching to be discovered by new fans. Don't miss Jim Jefferies at The Wiltern, April 29th.

Regarded as one of the fastest rising stars in the comedy world, Australian Jim Jefferies shockingly charming style has made him one of the most sought after comics on the world stage. The blunt and unforgiving comic gets away with jokes that most comedians wouldn't touch, due to his ability to both charm and offend the crowd in equal measure. Jeffries hosts a special live edition of his ever-popular Netflix series The Degenerates, featuring six comedians and a smorgasbord of salacious stand-up routines.

Sound good to you? Share this page on social media and let your friends know about Netflix Is A Joke Fest - The Degenerates Live hosted by Jim Jefferies at The Wiltern.