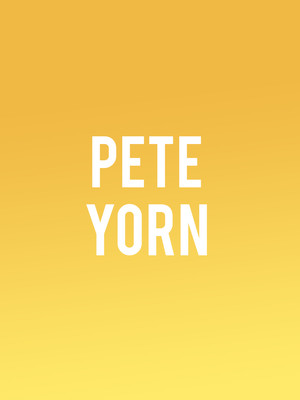 He knows how to carry a melody

In an era of 15 minutes of fame and quick tickets to the top via TV talent shows, it's rare to find an authentic musician like Pete Yorn. The rootsy rock singer-songwriter first rose to attention when he scored the Farrelly Brothers film Me, Myself and Irene starring funnyman Jim Carey. The release of his debut LP musicforthemorningafter solidified Yorn's status as an indie stalwart and saw him share the stage with the likes of the Foo Fighters, R.E.M and Coldplay amongst others.

After a silence of six years, Yorn released his long-awaited 7th solo studio album Arranging Time in 2016 to critical acclaim. The release found the acoustic balladeer on fine form, combining a timeless pop-rock aesthetic with Yorn's emotive croon. Don't miss Yorn live on tour in 2019 where he'll be bringing a pared-down, intimate acoustic set to cities across the US.

Sound good to you? Share this page on social media and let your friends know about Pete Yorn at Troubadour.