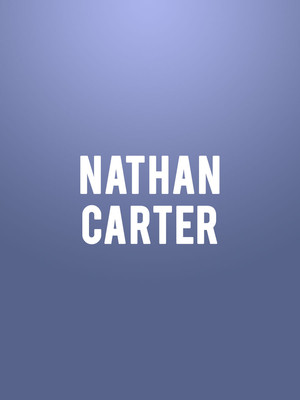 You know you're in the company of music royalty when Nathan Carter walks into the room. The megawatt smile and cheeky chappie personality are all there in spades.

Irish country heartthrob Nathan Carter may have been born in Liverpool, UK, but was destined to become an Irish Country icon thanks to the Northern Irish heritage of his parents. Since the release of his critically acclaimed debut album Starting Out in 2007, Nathan and his accordion have spearheaded the rise in popularity for traditional and country music heralding from the Emerald Isle in recent years, as well as simultaneously becoming one of the biggest names on the contemporary Irish music scene.

On stage, The Wagon Wheel singer takes the audience on a journey through country, pop and balladic music, demonstrating his prodigious skills with the accordion and an angelic voice that saw him perform at an early age at the Vatican, as head chorister of The Liverpool Boy's Choir. One of the hardest working young performers in the British Isles and beyond, Nathan continually performs live and his constant creative output has culminated in over ten studio and live albums.

Sound good to you? Share this page on social media and let your friends know about Nathan Carter at Wilshire Ebell Theatre.