Sorry! You missed Netflix Is A Joke Fest - Middleditch and Schwartz at Wilshire Ebell Theatre 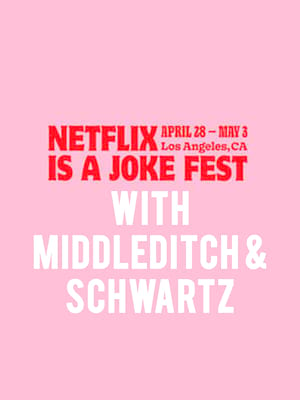 Netflix Is A Joke Fest - Middleditch and Schwartz

It's going to awesome

Why See Netflix Is A Joke Fest - Middleditch and Schwartz?

THE IMPROV STYLINGS OF THESE COMEDY DARLINGS

With an increasing number of stand-up specials made especially for its roster (over 200 can be found on-site already), it makes sense that streaming heavyweight Netflix is taking its golden comedy formula to the stage. Taking place from Monday, April 27th to Sunday, May 3rd, the first-ever Netflix Is A Joke Fest will leave LA in stitches at over 100 venues citywide, featuring the biggest and brightest established comics, as well as up and coming performers that are just itching to be discovered by new fans. Don't miss ever-delightful improvisers extraordinaire Thomas Middleditch and Josh Schwartz at the Wilshire Ebell Theatre on May 1st.

Known for their turns as neurotic tech boss Richard in Silicon Valley (Middleditch) and the terminally absurd Jean Ralphio in Parks and Recreation (Schwartz), you can be sure that this double act have got the hilarity sewn up. No strangers to the art of improvisation, Middleditch learned his trade at celebrated improv incubator The Second City in Chicago, whilst Emmy winning writer Ben is a member of New York's Upright Citizens Brigade Theatre, where he still performs in his group 'Hot Sauce' regularly. He also has many voice credits to his name, notably that of BB-8 of Star Wars fame.

Sound good to you? Share this page on social media and let your friends know about Netflix Is A Joke Fest - Middleditch and Schwartz at Wilshire Ebell Theatre.