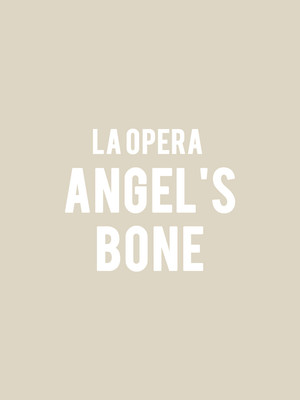 A bold work that integrates vocal and instrumental elements and a wide range of styles into a harrowing allegory for human trafficking in the modern world.

Contemporary composer Du Yun and librettist Royce Vavrek's visceral, compelling, disturbing and deeply moving contemporary opera Angel's Bone is a latter-day parable about human trafficking mixed with shades of magical realism and a heady cocktail of punk rock, cabaret, modernism, electronic music and even some Renaissance-era polyphony. It's eclectic score and powerful story struck critics and audiences alike with awe upon its world premiere in New York in 2016, winning the Pulitzer Prize for Music just a year later.

The thrilling opera makes its West Coast debut during the LA Opera's hotly anticipated 2019/20 season, bringing together mezzo-soprano Abigail Fischer, baritone Kyle Pfortmiller, versatile indie vocalist Rosie K and classically-trained pop singer Kyle Bielfield for two special performances in the spring of 2020. They portray two fallen angels who are at first taken in by a suburban couple. All too human, the couple give in to greed, de-wing the celestial beings and beging to make money off of them in a myriad twisted ways.

Sound good to you? Share this page on social media and let your friends know about LA Opera - Angel's Bone at Dorothy Chandler Pavilion.