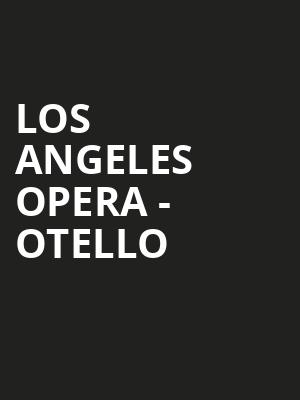 Photo by Jr Korpa on Unsplash

The drama and the tragedy of Verdi's Shakespearean masterpiece come to LA with this explosive production starring Russell Thoma. A heady and dramatic whirlwind of love, heroism, jealousy, despair, and nefarious intent from the very opening chord and opening storm scene, Otello is a thrilling experience for those seeing it for the first time or the fortieth.

A general in the Venetian army, the imposing Othello is aided by his ensign, the villainous and cunning Iago. With a merciless zeal, Iago plots behind the back of his captain, manipulating his emotions for his own gain. When the younger and less experienced Cassio is promoted ahead of him, his attention turns to destroying Othello once and for all, taking away the one thing he holds most dear, his wife Desdemona.

Written by Shakespeare in 1604 and adapted by Verdi in the late 1870's Otello's themes of jealousy, discrimination, racism, and revenge have never stoppered its relevance, marking it as one of the most performed works - in any version- the world over.

Sung in Italian with English subtitles

Sound good to you? Share this page on social media and let your friends know about Los Angeles Opera - Otello at Dorothy Chandler Pavilion.