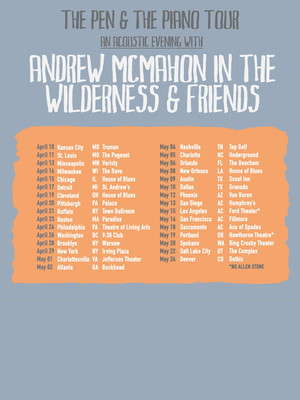 McMahon has lost none of the attributes that made him one of the most promising young performers of the past decade.

The Pen and The Piano Tour

Once best known as the lead vocalist and main composer of the bands Something Corporate and Jack's Mannequin, indie king Andrew McMahon has risen up under a solo moniker to critical and commercial success. Imbuing his upbeat pop with a trademark warmth and optimism, his blend of synths and electronic soundscapes is coupled with razor-sharp on-the-nose phrasing and definitive pop moments. For 2018, Andrew McMahon brings his fans a special acoustic tour, The Pen and The Piano Tour.

When it comes to his live shows, McMahon pulls no punches, giving them the same boundless energy that can be found in his songs. He's dynamic performer who climbs onto speakers, regularly rises from his piano chair and throws himself into the audience to crowd surf. This vigour, coupled with his songs' raw and emotional honesty makes for an arresting performance.

Sound good to you? Share this page on social media and let your friends know about Andrew McMahon at El Rey Theater.