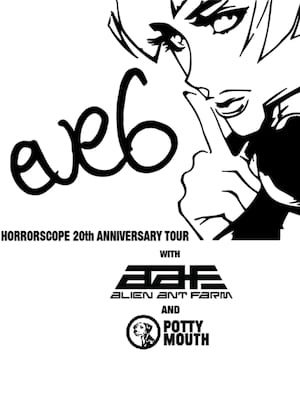 ...playful verses, unforgettable choruses, fast paced music, and live for today lyrics. It's everything you expect from the fun-loving band out of Southern California

Celebrating their sophomore album's 20th anniversary, SoCal punk-pop trio Eve 6 are dusting off old classics and performing Horoscope in its entirety across North America this winter. Formed in 1995 whilst founding members Jon Siebels and Max Collins were still in high school, the outfit honed their act and added drummer Tony Fagenson to the line-up before the album's smash hit lead single 'Inside Out' rose to the top of the Modern Rock charts and tipped it into certified platinum status in 1998.

Over the subsequent decades throughout relentless touring, line-up changes and a short hiatus from 2004 to 2007, the band have evolved their sound with post-grunge and hard rock experimentations whilst keeping pop hooks and big riffs at the center of their sonic world. Delivering up 90s rock nostalgia, punchy verses, and instantly singable lyrics, an Eve 6 show is anything but stale, conjuring the glories of the past whilst keeping things rearing forward thanks to a pioneering spirit and boundless on-stage energy. Wear some comfortable shoes and get ready to mosh until you drop!

Sound good to you? Share this page on social media and let your friends know about Eve 6 at El Rey Theater.