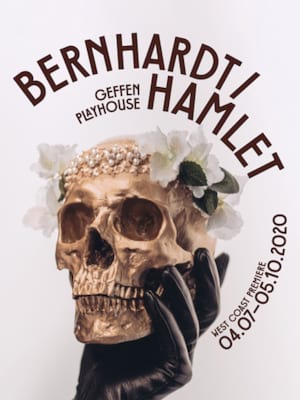 The Broadway sensation so clever it uplifts, so timely it hurts

Unfortunately, The Geffen Playhouse has canceled this upcoming production of Bernhardt/Hamlet.

To die, to sleep  to sleep, perchance to dream

Following a critically acclaimed stint on Broadway in 2018, prolific American playwright Theresa Rebeck's Bernhardt/Hamlet weaves its theatrical magic during a 2020 West Coast premiere at LA's Geffen Playhouse. Praised for its electric wit, the true tale of French actress Sarah Bernhardt is not only an entertaining comedy romp, but a thrilling love letter to theatre and its ability to foster both high art and gender equality.

The story follows the 55 year old Bernhardt at the height of her career. Not only is she the toast of French theatre, but she runs her own theatre company and has her pick of roles and lovers. Not content to rest on her considerable laurels, the diva sets her sights on the role of Hamlet and despite the naysayers and rampant chauvinism her daring inspires, sets about mastering the melancholic prince for the 1899 Parisian production.

Seen Bernhardt/Hamlet? Loved it? Hated it?

Sound good to you? Share this page on social media and let your friends know about Bernhardt/Hamlet at Gil Cates Theater at the Geffen Playhouse.