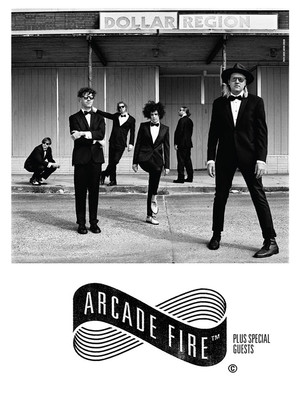 If you needed a reminder that there's still magic in live music, then look no further.

Their 2004 debut Funeral announced Arcade Fire as one of the generation's most exciting rock groups and their reputation has only continued to grow. Each subsequent album has found them breaking new ground artistically while maintaining a tremendous commercial appeal (they have more than a few Grammys under their belt).

2018 sees them continue to tour in support of Everything Now, an ambitiously realised album which carries on the laid-back disco influence from Reflektor. Arcade Fire are having a blast, and while they may take their music making deadly seriously, their live shows are never less than spectacular. Expect mirror balls and glitter aplenty - like Bowie or U2 before them, Arcade Fire wear their rock 'n' roll crown with aplomb.

Images by Rama and Rama Used under Creative Commons License

Everything about the show was amazing. The opening was unexpected and... more

Tim Plumer, Jr.: “Even better than the first time around”

The venue was great (Blue Hills Bank Pavilion)—as was the weather. However,... more

Sound good to you? Share this page on social media and let your friends know about Arcade Fire at Greek Theater.